Whilst many businesses focus substantial effort and expense on chasing position #1 in the Google SERPS rankings, Google suggests it should not stop there. In a recent research report published by Google Research they conclude that it is possible to get 50% more traffic even if you occupy position #1 in SERPS rankings. How is this possible you may ask?

Ever since Google adverts (AdWords) started appearing alongside (and above) Google SERPS results, marketers have often wondered how the traffic was divided between the two opportunities for the visitor click. If you are in SERPS position #1 what would the point be of also advertising with Google AdWords?

Well it turns out that 50% of clicks generated by also having advertising with AdWords on the SERPS page where you already have the #1 position are incremental.

So it appears that Advertising with Google AdWords, even if you occupy SERPS position #1, can generate even more traffic for you. Futhermore if your position is lower than the #1 slot, the click incrementality is even greater. 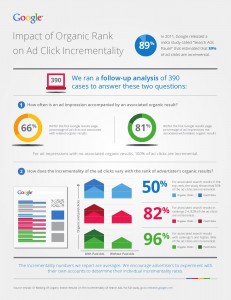 In 2011, Google released a Search Ads Pause research study which showed that 89% of the clicks from search ads are incremental, i.e., 89% of the visits to the advertiser’s site from ad-clicks are not replaced by organic clicks when the search ads are paused. In a follow up to the original study, we address two main questions: (1) how often is an ad impression accompanied by an associated organic result (i.e., organic result for the same advertiser)? and (2) how does the incrementality of the ad clicks vary with the rank of advertiser’s organic results?

While these findings provide guidance on overall trends, results for individual advertisers may vary. It’s also important to note that the study focuses on clicks rather than conversions. We recommend that advertisers employ randomized experiments (e.g., geo-based experiments) to better quantify the incremental traffic and lift in conversions from the search ad campaigns and that they use the value-per-click calculations in the original search ads pause study to determine the level of investment on their search ads.

Source: Impact of Ranking Of Organic Search Results On The Incrementality Of Search Ads. For Full Study go to research.google.com